What is perverse is liquid

I’m squatting over a rusty-hued lump. You can imagine, like squeezing out an entire tube of toothpaste. I am right there, on the second tier of your turd-like impression. Barely noon, it registers 112 degrees. The view is so vast that the only thing I can comprehend is that my sense of self is entirely out of scale. There is nothing behind me or beyond. It’s a type of nothingness that only excess can produce. It is the deprivation of familiar whims and I am reminded that there is no convenience like the bounty of a corner bodega. But I packed my gut before I arrived. The yogurt, banana, and green tea are culminating at my anus, so I make use of what lines my pockets, crumpled notes, and a used tissue. With the impossible intention to leave no trace, I burn and bury the waste.

Few things can be here. The snakes, scorpions, and kangaroo rats are infrequent at best. Have you ever seen a kangaroo rat? I doubt it. They’re nocturnal, and if caught in a flash of light, they move like meth addicts. They’re exactly what they sound like, a tangelo—with the hind legs of a jackrabbit, a Cat Dancer for a tail, and the body-face of a stout mouse.

Everybody offers up like a banquet. Thwack! The flies, landing subtly on exposed skin, quickly tease out a tiny piece of meat from the surface, leaving you bloody, bruised, or both. Thwack! Moving is what you do here. You can come and go, but you cannot stay. It is a now place because it is a non-possessed place.

I’m here with another. She is Donald Ducking about the landscape in an oversized t-shirt, ass to the wind. She gathers hardened sap from the few spindly pine trees. Later we set fire to small bits. Under flame it liquefies and bubbles as it boils. The fumes are a thick sweet pleasure. The sun is impossible and omnipresent. A glaring hot white blowout. Wetness pools as fast as it evaporates around the edge of my shades and anything else that touches anything else. At this hour, the exposure is violent and our bodies become terracotta-like. I’m over it. This kind of beauty is exhausting. The only thing we desire is to put water in, or on, our bodies.

Into our sports utility rental we go. The breeze of conditioned air engulfs us. After an hour or probably more of all-terrain travel, the engine begins to smolder. Exhaust barreling along a dusty path, we emerge over yet another expanse. The mouth widens, the line spreads, and an ocean-like river divides the horizon. We land in an entirely artificial town or constellation of properties, demarcated by slabs of cement and awkwardly placed trees. Such greenery appears like a mirage of grotesque luxury. Everything is ironic, even the way the water meets

the land. There is no edge, no bank, no beach, just a liquid-filled void. Stripped bare, we submerge. Dripping dry. Over a parched surface, she draws Death—the thirteenth Major Arcana attributed to Scorpio—neither an end nor a beginning, but both, a sign of transformation. Scorpio, assigned the element of water, may have perceptions that border on psychic, but Scorpio’s insights are often clouded by the intensity of feelings or deluded by an elaborate imagination. This vital solvent is formless on its own, and that’s why those with this sign are quickly shaped by their relationships to others.

A.K. Burns, Untitled, 2014 Spiralina, polyurethane, and images ripped from a catalog of photographs by Tad Nichols of Glen Canyon, Utah before it was dammed in 1956. Currently the canyon brims with water over 500 feet deep. 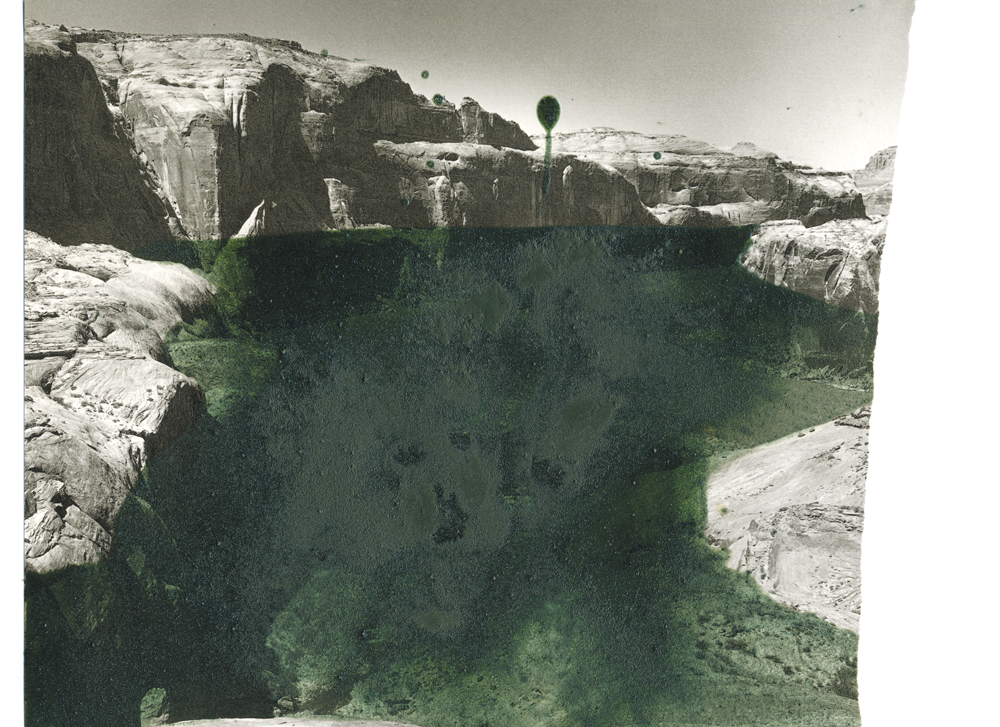 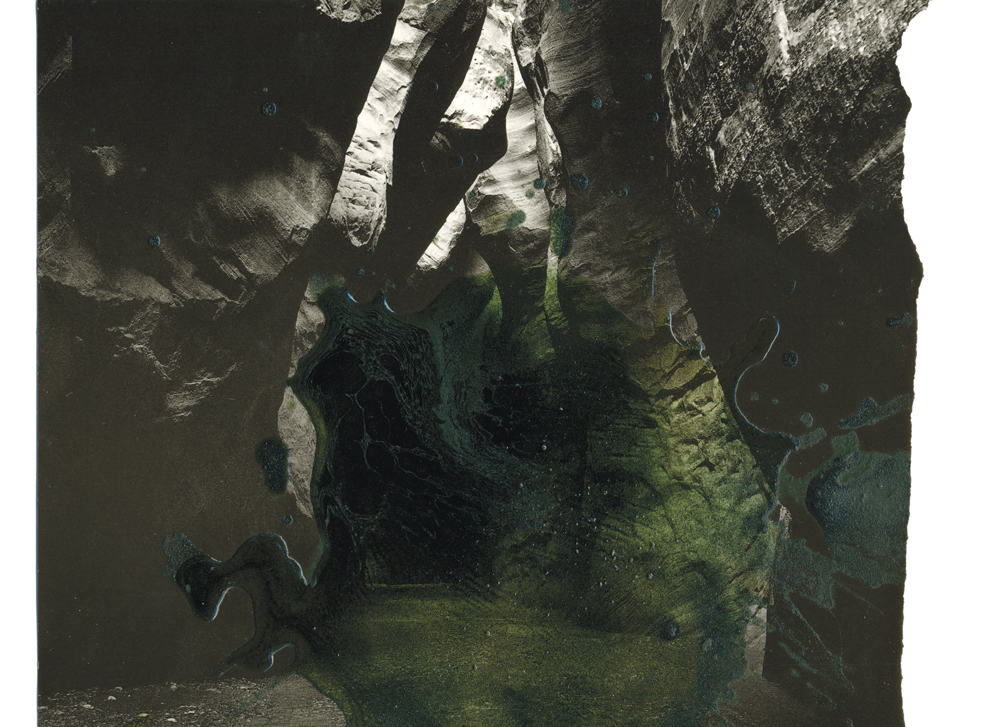 A History of Reason
Noura Wedell

What is perverse is liquid
A.K. Burns

from A Night in Hell
Alex Da Corte