The following is an excerpt from Godfre Leung’s text “Seven, Eleven, Twenty-Six: Some Conversions,” forthcoming as part of the artists’ book AA4 by photographers Peter Happel Christian and Phillip Andrew Lewis, who work collectively as Clear As Day. Land_AA is a series of eleven books on the legacy and mythology of American photographer Ansel Adams, framed around his eleven-step Zone System for black and white photography. Volume four of the series centers around a recording of Adams typing a letter on December 31, 1969, discovered by Happel Christian and Lewis at the Adams Archive, which they had transcribed to sheet music by composer Tim Hinck. It contains the sheet music score, a portfolio of photographs by Happel Christian and Lewis, a drawing by Lenka Clayton, Leung’s text, and recordings of executions of the score by Clayton, Chris Duncan, Michael Masaru Flora, Barbara Held, Jonathan Kaiser, Tiffany Ng, Greg Pond & Cesar Léal, and Steve Roden.

AA4 will be released on April 27 at Spectrum Business Systems, a typewriter shop in St. Paul, MN. The book launch will feature a reading by Godfre Leung and performances by Michael Masaru Flora and Jonathan Kaiser with Zosha Warpeha. Tiffany Ng will perform the AA4 score at Noyes Memorial Carillon at House of Hope Presbyterian Church following Sunday service on April 28. More information about the event is available here. Land_AA books can be purchased at Motto (Berlin), Printed Matter (NYC), Waiting Room (Minneapolis), and online at landaa.org.

Poetry enjoyed a privileged place in the system of aesthetics. The other arts were defined by their respective media (stone, color, building material, sound); the medium of poetry, however—language or tone, language as tone, but certainly never language as letters—disappears beneath its content so that, as with Nostradamus/Faust, the spirit can appear directly to the spirit. —Friedrich Kittler, Aufschreibesysteme 1800/19001

As Friedrich Kittler has demonstrated in Aufschreibesysteme 1800/1900, media come into existence when technologies of inscription intervene between the hand gripping the pen or the mouth framing the sounds and the production of the texts. —N. Katherine Hayles, How We Became Posthuman2

You press a key, the key hits the platen. It’s a different rhythm. —Susan Howe3 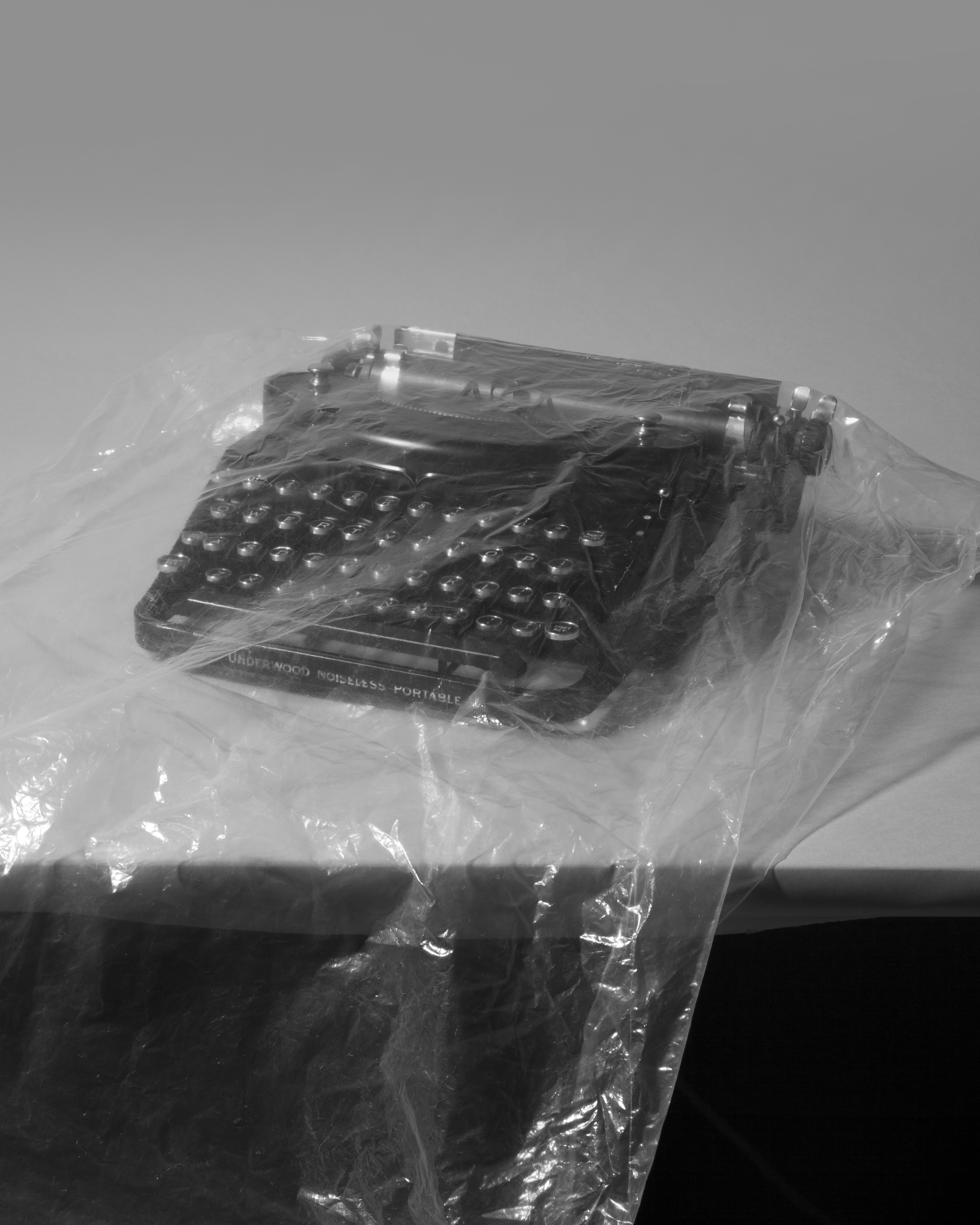 Poetry and music have a tenuous historical relationship. To generalize, as oral traditions recode themselves as written traditions, musicality falls away from poetry; the term lyric comes to exist in an impossible space between words and music. The poet Ezra Pound conceived a taxonomy of words, as they exist in poetry:

Melopœia, wherein the words are charged, over and above their plain meaning, with some musical property, which directs the bearing or trend of that meaning.

Phanopœia, which is a casting of images upon the visual imagination.

Logopœia, “the dance of the intellect among words,” that is to say, it employs words not only for their direct meaning, but takes count in a special way of habits of usage, of context we expect to find with the word, its usual concomitants, of its known acceptances, and of ironical play. It holds the aesthetic content which is peculiarly the domain of verbal manifestation, and cannot possibly be contained in plastic or in music. It is the latest come, and perhaps most tricky and undependable mode.4

Here, Pound separates the musical and semantic functions of words, and further divides the semantic into descriptive and polysemic functions. Elsewhere, he imagines an exercise in which the poet develops the melopoetic mode:

Let the candidate fill his mind with the finest cadences he can discover, preferably in a foreign language so that the meaning of the words may be less likely to divert his attention from the movement . . . [so that] he can dissociate the vocabulary from the cadence.5

We encounter in Pound’s exercise something akin to the partitioning of the senses in the modern arts, perhaps best exemplified by the closing of music students’ eyes as they listen to music in their “ear tests.” A non-essential sense shall not interfere with the one that is being trained, only in Pound’s case we are talking about the sense of a word, rather than the five supposedly discrete senses that are conventionally recognized to constitute the human sensorium.

The poetic page, in most cases, is nearly devoid of musical notations. A few exceptions occasionally appear: accents and diacritics; bolded or underlined text, italics, or other formattings of typeface; the use of different fonts. The most obvious examples of these kinds of musical notation appear in avant-garde poetries—Pound’s modernist contemporaries—that attempted to reimagine the place of the sonic in poetry: the Italian Futurist parole in libertà, Russian Zaum poetry, Dadaist phonetic poetry. The most commonplace example of musical notation in written poetry is more mundane: the linebreak.

It is an anthropological fantasy—or perhaps a New Age one—that there once was an unalienated art, an undifferentiated song–dance, that later splintered into the separate disciplines of lyric poetry, formal music, choreographed dance.6It is even more fantastical that we could reunite these now-separate arts through the common origin of breathing.7 We can, however, trace conventions of musical lines and phrases back to vocal ones, and those vocal ones to the capabilities of the human breath, and perhaps also to its natural rhythms. A group of Pound’s successors, Robert Creeley, Robert Duncan, Lorine Niedecker, and Charles Olson, were explicit on the latter point, reinvesting the poetic line with both the musicality and spirituality of breathing.8 There is an anachronism in their poetics, in contrast to, for instance, the motivation of some of William Carlos Williams’s line breaks by the edge of his doctor’s prescription pad.

As I write this, composing and literally typing on my Macbook—and those are separate things that make one single, common sound at the same time—I am listening to a recording you will likely never hear, a WAV file of Ansel Adams typing a letter on his Hermes 3000 typewriter on December 31, 1969. Writing is slow. Motivation escapes as soon as it arrives. The rhythms of my typing, if I can even call them rhythms, are punctuated by many things, but mostly pauses, hesitations, holding down the delete key. MS Word and Mac OSX make up a very different interface than the Hermes 3000. But the virtual landscapes imagined by the programmers of my digital interface seem to have been inspired by the typing subject behind the letter that I’m listening to being composed. The names of the last four versions of OSX all refer to Adams’s photographs of Yosemite National Park: El Capitan, Yosemite, Sierra, High Sierra. My work-issued laptop’s desktop image, which I’ve never customized from the factory preset, is a cropped and perversely colorized JPEG of one of those photographs, Half Dome, Merced River, Winter, 1938.

But musically, the biggest difference between Adams’s Hermes 3000 and my un-updated Macbook running OSX Yosemite, version 10.10.5, is the line break. On the typewriter, digital pulsations were converted into tidy lines of text, usually six to six-and-a-half inches long. The rhythms of Adams’s typing are phrased by pauses of his digits; some of those pauses are to wait for the machine’s carriage return, which is sometimes but not always audible in the recording. If the poetic line break is the end of a musical phrase, and the end of a musical phrase is the exhaustion of a breath, then a part of me wants to hear the carriage return as busy fingers coming up for air—is that any more an act of the imagination than calling my colorized desktop image an Ansel Adams photograph?

Typewritten line breaks are motivated by the edge of the margin. They point to a filling up and therefore, as in Friedrich Kittler’s formulation, to the typewriter as an instrument of storage. By contrast, my word processor can accumulate endlessly without pause. My pauses are for want of motivation. One imagines a relay from author to typist, and a translation of the rhythms of oratorial breath into the clockwork of clacking typebars, punctuated by the famous ping of the typewriter’s warning bell. The formatting of the oral into text disrupts the organic flow of words from breaths into page margins. The bell audibly reprograms the speaker’s rhythms and teaches both speaker and typist, in a manner of speaking, how to become posthuman.

(There are no warning bell sounds to be heard on the recording of Adams’s typing; it must have been disabled—or perhaps the margin was like a time signature and the ever-fastidious Adams always initiated the carriage return before triggering the warning.)

Performed in two takes at the Charles Baird Carillon at the University of Michigan, Ann Arbor, August, 2018. Recordings from outside Burton Memorial Tower and inside the carillon playing cabin.