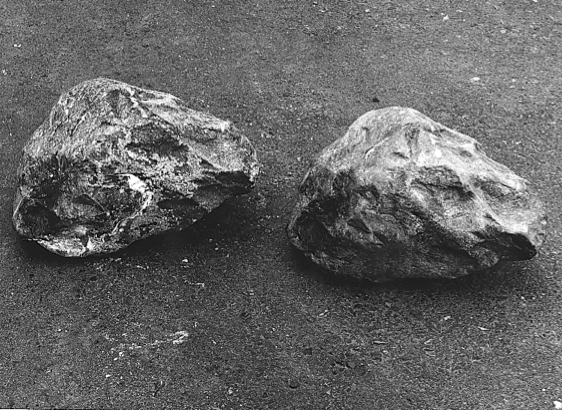 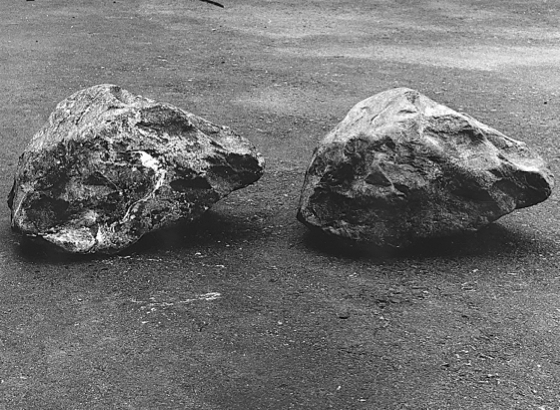 So, how do we identify the problem? How does sculpture think? How does sculpture sculpt time? How does sculpture proceed along with this time itself—memory, present, protension toward the future—in order to disrupt our familiar spaces, that is, to disrupt our insides, to “touch” us with places, the aîtres that it invents? Here one must understand that the problematic of the “nascent state” has nothing nostalgic about it, nothing directed toward a thought origin [origine pensée] as the lost source of all things. Essere fiume is the clear proof of this, within the “dialectical image” that it offers of the encounter, in one and the same place, of two profoundly dissimilar temporalities (the geological time of the stone in the river, and the artistic time of the mountain).

It’s when it erupts into the present, not as some distant source, but as the “eddy in the stream,”1as Walter Benjamin spoke of it in regard to the concept of origin — that the “nascent state” truly touches us. For example, we are indeed familiar with the idea, or the vague, idealized image, that our “site of birth” was the belly of our mother. But it is more difficult to familiarize ourselves with the present of such a situation: it is difficult to wake up each morning and gaze into the mirror and see our own skull as a mold — an imprint hardened by our own years — of the mother’s genital strait.2

And yet, it’s precisely in this way that Penone succeeds in thinking the forms he invests in: sculpture thus takes on a value as material anamnesis, an anamnesis in action, in stone, in present time. Something else, assuredly, than the simple fabrication of a spatial object. When Penone sculpts, each gesture, each moment is produced within the coextension of things that are typically thought of as contradictory. Here, anamnesis takes the form of a kind of dialectical material: in this way, modeling [modelage] will be thought of by Penone as casting [moulage] (even when the entirety of classical thought regarding sculpture vehemently considers these two processes as diametrically opposed to each other).3

What’s more, the form that presents itself from out of the material will be understood as a result of an excavation, an archeological dig. And, in its own turn, this result will be thought as a dialectics of the substrate, of the void and flesh which dig:

When one plunges one’s hand into the ground in order to extract dirt, a void is created where the hand has passed: the earth becomes mixed, a sculpture takes form. The void of the flesh becomes earth.4

To make a sculpture? For Penone, this also becomes to do a dig. To make an anamnesis out of the material retained from where one has plunged one’s hand: what the hand retains of the material is nothing other than a present form, in which all the singular times of the site, of which the material is made, from which it draws its “nascent state,” are accumulated and inscribed. Thus, for the sculptor, memory is a quality proper to the material itself: matter is memory. Utilizing coal—even if it is merely a little piece of a charcoal stick—Penone will question himself concerning the troubling fact that carbon provides the most stable element of the difference between plant, animal, and mineral life. The memory of carbon will cross paths with that of the artist so that a material image of the “nascent state” of the mineral emerges—this image is nothing less than the decomposition of animal bodies, even human bodies, immemorially layered in the earth, agglutinated into peat and coal:

How is coal born? There is a crowd. We are so cramped, packed together, that we smother each other, we doggedly struggle for more space, crammed, pressed, trampled upon, we flatten ourselves, we smash ourselves, we compress ourselves, reduce ourselves, penetrate ourselves, and in this way, by way of a twisting movement [en un mouvement de torsion], we extract the light from out of ourselves; pressed, hardened, mutually penetrated, we become matter, solid matter but from which emanates the stench of fear. […] A stratification of men, who become dust, earth, the eyelid hiding the eye from the full view of occurred things. To succeed in seeing the eye of the earth.5

But the sculptor must invest in all the meanings [sens] of time. To dig is not merely to hollow out the earth in order to extract from it things that have long since died. It’s also to conserve [ménager], within the opened earth — œuvrée, ouvrée: worked, opened, as it was once said — a passage where forms themselves have a memory of their own becoming, of their birth or future growth. It will suffice for Penone to create, within the earth, the intimate embrace of a counterform (or rather the embrace of a form in the primary sense, which is the negative) of the earth’s head and its vegetal seeding (pumpkins or potatoes), in order for the sculptor’s head at the nascent state to be capable of slowly seeing the light of day starting from a place other than the maternal belly. The archeology of material here does not happen without the archeology of a subject which confronts itself: thus, would not the art of the sculptor consist of digging out galleries, of excavating the memory of his own flesh and thought? We will not be surprised to learn that Penone has made his work according to the hypothesis of a descent into “the mines of the skull”:

We descend into the brain by way of vertical wells which take us into diverse depths; at each stop, galleries lead, by way of reasoning, to the excavation of ideas; once they have been detected, they are brought up to the surface; and the more the brain is rich in memory sediments, the more galleries there are, the more stops, the more excavations [fronti di scavo].